Germans are stocking up on gold bars Photo: Reuters

German investors have piled into gold bars and coins in the first quarter of the year as a hedge against European Central Bank policy and the threat of a Greek default bringing down the eurozone.

Latest figures from the World Gold Council show that Germans increased their buying of gold coins and bars of bullion by 20pc to 32.2 tonnes in the last quarter, the highest rate of purchases seen in a year.

The strong buying of gold - which is traditionally seen by investors as a safe-haven asset – was seen across Europe amid growing uncertainty over central bank policy and the standoff between Athens and its creditors.

“This was the strongest start in Europe for gold coins and bars that we have seen since 2011,” Alistair Hewitt, head of market intelligence at the World Gold Council told The Telegraph. “German investors are fretting over the ECB, Greece and Ukraine.”

On the wider market, the World Gold Council revealed that total demand in the first quarter fell 1pc to 1,079 tonnes compared with the same period last year.

The first two months of 2015 have seen turmoil in the currency markets extend from Russia and Ukraine to the heart of Europe.

“Central Banks Now Open 24/7 Fighting Currency Wars and Deflation,” blared a February 12th Bloomberg headline. Against this backdrop, precious metals have been on the rise in terms of all currencies except the Swiss franc and the U.S dollar.

In January, the Swiss National Bank shocked markets by announcing that it would de-link its currency from the euro. The move came one week ahead of the European Central Bank’s $1.1 trillion Quantitative Easing announcement. Swiss officials decided it 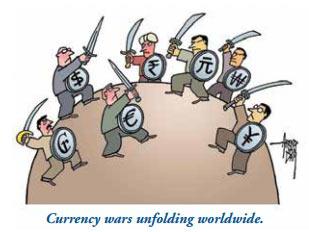 would be too costly to keep accumulating depreciating euros in order to maintain the currency peg. The Swiss franc surged by the most ever in a single day.

With the exception of Switzerland, all other countries in Europe (and many others around the world) are trying to depreciate their currencies.

It Seems Like Hedge Funds Are Jumping Into The Gold Market

The dominant narrative in the gold market has been that investors have fled the sector in search of better returns in the rest of the markets as the Fed has stabilized the system. In other words, the gold bubble has popped and the last investor needs to shut off the lights when they are done.

A referendum that would force the Swiss central bank to hold a fifth of its assets in gold could rock foreign exchange markets, analysts have warned.

On the 30th November, voters in Switzerland will head to the polls to decide whether the Swiss National Bank (SNB) should boost its gold holdings and refrain from any further selling of Swiss gold.

The referendum, proposed by the ultra-conservative Swiss People’s party, will also require the bank to repatriate all Swiss gold holdings currently held outside of Switzerland if passed.

The ban on selling gold would go into effect immediately and the SNB would have five years to reach the 20 percent requirement.

Foreign exchange markets are likely to be most affected by the move. Three years ago the SNB pledged to ensure the country’s competitiveness by keeping the Swiss Franc at a set level at 1.20 francs per euro. Any move to bolster gold holdings could put this “floor” under pressure and will likely trigger further euro weakness – which would make Swiss exports more expensive.

“Investors could use the poll as an excuse to challenge the EUR/CHF floor and the market would then start to speculate on an SNB rate cut to negative interest rates, especially as short-term rates are lower in the euro zone than in Switzerland,” said senior currency strategist at Societe Generale, Sebastien Galy.

Over the five-year period, the SNB would have to sell part of its currency reserves, or theoretically print money to finance the gold purchases, Galy said.

“Currently this amounts to selling $68 billion, mainly by selling euro and dollars, to buy 1,783 tons of gold,” he added.

The central bank has said such measures would be detrimental to Switzerland as it would undermine the independence of the central bank and such large scale purchases of gold would prove very costly.

The latest polls showed 44 percent of respondents were in favour of the vote. Governing board member of the SNB Fritz Zurbruegg said he was taking the measures “extremely seriously” at a conference in Geneva last week.

“Never be afraid to sit a while and think.” – Lorraine Hansberry

Gold is sometimes a tricky asset to figure out. Traditionally, the yellow metal trends nicely in negative real-rate environments, whereby inflation is higher than nominal interest rates. The argument goes that negative real-rate environments result in money positioning into the metal as an inflation hedge given its historical behavior as a way of preserving wealth in the pre-fiat economic system.

Sometimes gold acts like a “risk on” asset which rallies with equities like the S&P 500 SPDR ETF SPY +0.37% . Sometimes, it rallies with Treasurys in a “risk off” period where behaviorally deflationary trades tend to do better. This makes the absolute price movement of gold — repped here by the SPDR Gold Trust ETF GLD +0.17%  — somewhat difficult to predict because its behavior changes in different market regimes. This holds true independent of whether you view gold as an investment, trade or hedge. Contrast this changing behavior to that of more traditional sectors of the stock market like utilities, consumer staples and health care, which our equity-sector ATAC Beta Rotation Fund BROTX -0.35%  can position fully into during periods of heightened volatility.

Where gold is perhaps most interesting, in my opinion, is in its relationship to black gold, oil. During volatile periods for equities, gold tends to do fairly well relative to oil. Interestingly, this behavior somewhat tracks the VIX index, which itself rises during heightened fear periods for the stock market.

Take a look below at the price ratio of gold ($GOLD) relative to light crude oil ($WTIC) in the reddish line, and the spot VIX index in black behind it. As a reminder, a rising price ratio means the numerator/gold is outperforming the denominator/oil. A falling ratio means underperformance.

The Coming Gold Rush: Time To Accumulate Gold And Gold Assets. Will We See $3K Gold In 3 Years?

In definition, gold is:

The deficits caused by governments’ excessive and wasteful spending, including those caused by wars since and including WWII, have always created screaming commentary similar to what we read today:

Just how is Washington and the nation going to cure the enormous deficits we have created? They are a serious percentage of our GNP and foreign governments are effectively in potential control of our country by way of their large investments made in our government bonds.

Our history shows we have solved this problem not by shrinking these deficits in actuality, but by reducing their percentage of our GDP and debasing our dollar in so doing. This has been done by reflating (see former prices): $0.17 per gallon of gas, $2.00 for a carton of cigarettes, $850 for a Chevrolet deluxe, and $15,000 for a 2,000-square-foot suburban home are just a few examples. Wages and income have kept pace with price inflation nearly on par.

Why I’ve Turned Bullish On Gold

Gold, silver and most commodities peaked in 2011 and have been falling ever since. At that time we entered a period where a disinflationary/recessionary bias entered the system, not just for the US, but the world at large. Actual deflation showed up in various economies, and recession or at least slowing growth rates became prevalent in most countries. It is no wonder that commodities in general began to fall. I think that is all about to change, but not at first — it will happen at last.

We have probably peaked at 4.1% GDP in the third quarter, and chances are good that the next two quarters will be trending lower. The first quarter should be very challenging. But the year as a whole should be the highest growth year since the recession ended. Conversely, at a .09% inflation rate year-over-year, the odds of a continued fall in inflation are low from here. After all, how much lower can the Fed allow the rate to fall? Bernanke at his news conference said that they are more than a bit concerned with the falling inflation rate and will do whatever is necessary to combat it if it should continue. So the tendency will be to fight any trend toward lower growth and lower inflation.

My view is that the Fed will be confronted with both during the first quarter of the year and that they will be forced to change their tapering policy to a policy of reflation, or at the very least, put their tapering plans on hold. I wouldn’t be surprised to see them eliminate or reduce the interest rate charged to banks on excess reserves to try and fight the drag on the economy in the next several months. A major correction in the stock market could hurry this decision.

But let’s assume I’m wrong and falling growth and anemic inflation is not an issue in the 1st quarter, and that instead, we have a progressively better year in 2014. That case, the bullish case, is actually very persuasive and even more bullish for resource stocks in general and precious metal stocks in particular. It projects continued growth in GDP and a rising inflation rate.

Recently we have seen the development of a new energy boom, perhaps the most important boom in a generation. We are actually on our way to energy independence and making such cartels as OPEC, irrelevant. IHS, an energy group, is estimating by the end of next year, rail capacity could be enough to handle 700,000 barrels of crude per day, compared to 150,000 today. We are about to become net exporters of oil and gas to the world while importing less. This one industry will be instrumental in raising exports and increasing the GDP in 2014 and into the future.

Read The Full Article A Seekalpha 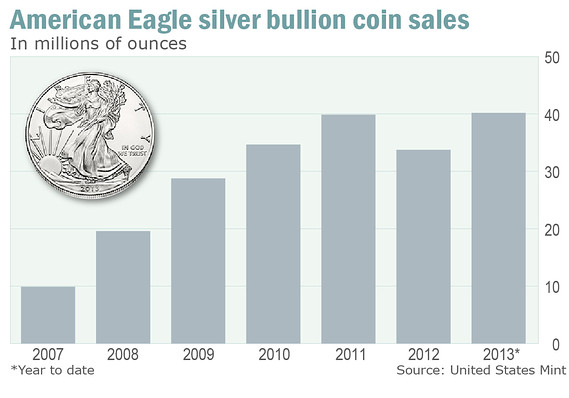 U.S. Mint sales of the American Eagle silver bullion coin have climbed to an annual record.

SAN FRANCISCO (MarketWatch) — Silver prices have dropped more than 30% year to date and demand for the physical metal has reached a fever pitch: United States Mint sales of the American Eagle Silver Bullion Coins have already hit a record this year.

But as supplies of the coin tighten, analysts and bullion dealers said there are still many options for those interested in buying silver. Many predicted all along that sales of those coins would reach a record this year — and they expect the metal’s popularity to continue to grow.

“Private investor demand for physical silver in 2013 has been staggering,” said Adrian Ash, head of research at BullionVault, an online physical gold-and-silver exchange headquartered in London.

Read the full article at MarketWatch