Our tactical passive portfolio has performed well since its inception in August 2012, on the back of rising silver prices as investors sought a safe haven ahead of the US fiscal cliff showdown, rising confidence in European equities and theAberdeen New Thai Investment Trust (ANW), one of our active picks, continuing its successful run.

Another active pick, the £13 billion Standard Life Global Absolute Return Strategies fund (GARS), has solid long-term performance and did well in 2012, partly because it took a position that reaped the benefit of US dollar strength versus the euro.

However, it is quite sophisticated, and since taking over this portfolio from Peter Temple – who has now retired – I’ve discovered that financial advisers don’t fully understand the fund. It’s never a good idea to invest in something you don’t understand it, so I asked Andrew Ford, an investment specialist on the GARS investment team, to shed light on the fund’s current strategy and the impact of recent staff departures.

GARS is essentially a “best ideas” fund and there are currently 29 ideas in play. They are typically expected to pay off over a longer time frame (of around three years), as the markets they aim to beat are less efficient over longer investment horizons. The team likes to identify potential risks and find off-setting strategies and methods of implementation that address them.

GARS is, for example, long the US dollar and short the Canadian dollar on the rationale that Canada, with its highly geared domestic consumers and an overheated housing market, is not the safe haven investors think it is. Team head Euan Munro visited Canada recently and reported tell-tale signs of a housing bubble, such as A-grade properties being built on C-grade plots of land.

“Canada is exposed to the global slowdown due to its reliance on commodities, whereas the US is more insular,” says Ford. “We are favourably inclined to the US. We are encouraged by the recovery in the housing market, with house prices having risen for six straight months now, which is indicative of a functioning credit market. We believe unemployment will continue to fall once the uncertainty regarding the fiscal cliff has dissipated.”

The GARS team estimates that the resolution of US tax problems will take 1.5% off US growth rates next year and that the associated uncertainty has reduced the capital expenditure normally seen at this stage of the business cycle. It believes there is, in particular, pent-up demand for technology, due to a growing awareness among company managers that it is often more cost-effective to invest in efficiency-enhancing technology than employ additional labour.

The team has therefore taken a long Nasdaq and short Russell 2000 position. The arguments against small-cap stocks in the Russell 2000 index are that recovery is already priced in and that quarterly results are likely to disappoint against consensus expectations of near 20% growth in earnings per share. Also, large companies often have more cost-cutting potential and tend to be more export oriented, so they have benefited from the weaker dollar.

GARS has a long position in Russian equities, via a basket of nine global depositary receipts that track the Russian index, which has high exposure to oil and gas. The team believes Russian valuations are cheap, at around 4.5 times earnings, and that President Vladimir Putin is keen to at least make the right noises regarding corporate governance improvements.

Exposure to non-Middle Eastern oil is a key part of the investment strategy behind this position, an attractive trait given that the portfolio has exposure to equities – in the US, for example.

It is often said that the fund rigorously canvasses right across the company for ideas. GARS really matters to the Standard Life group as a whole. It was set up in 2005 to address underfunding in the insurance group’s staff pension scheme, which still invests some £2.6 billion in the fund, a massive sum relative to the group’s market capitalisation of £6.5 billion.

Significantly, three of the multi-asset team – David Miller, David Jubb and Richard Batty – left GARS for Invesco Perpetual in September 2012. Analysts were quick to say this would have little impact, as Munro and Guy Stern are still taking the decisions. However, the situation is not as simple as that.

The team members who left have been replaced by three senior internal transfers, plus Adam Rudd from JPMorgan in New York, who had already been approached to add derivatives expertise to the team. What gives me comfort is that there has been no change to the risk team, a key part of the GARS process headed by the uber-thorough Brian Fleming.

National Bank of Ukraine (NBU) said Friday it raised the percentage of gold in its reserves this year to 7.72 percent from 4.36 percent a year ago.

The bank said it is boosting its gold reserves “to avoid the negative impact of the global crisis on the economic development of the country as it … works on diversifying the components of international reserves in Ukraine.”

The International Monetary Fund said earlier this month that in August and September Iraq increased its gold reserves to 31.07 metric tons from 5.8 metric tons.

In the third quarter, according to the World Gold Council (WGC), the world’s central banks bought a total 97.6 metric tons of gold.

The massive sell-off on Wednesday, during which the equivalent of 24 tonnes of gold was reportedly offered for sale in a single futures market transaction, took the shine off of what would have been another stellar November for precious metals, raising new questions about manipulation in gold and silver markets.

With just one month left to go in 2012, the gold price is all but sure to rack up its 12th straight year of gains while silver is set to turn in another big double-digit gain as investors eye developments in Washington related to the fast-approaching fiscal cliff and await the next round of Fed money printing.

There were other important stories in precious metals markets last week, such as more record highs for ETF holdings, the approval of the long-delayed third bailout for Greece that should bolster the euro (precious metals prices often move with the euro, opposite the dollar), along with news of strong gold demand from India and China.

But, nothing compares to the dramatic market action seen early Wednesday morning when, within a matter of minutes, the gold price plunged more than $20 an ounce before tumbling another $10 in the hours that followed as shown in the BarChart graphic below.

The silver price also plunged, falling more than a dollar an ounce in early trading on Wednesday, and neither metal was able to mount much of a recovery. 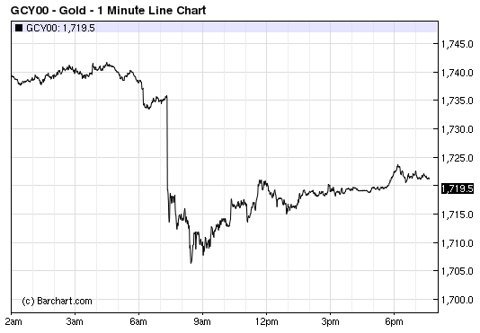